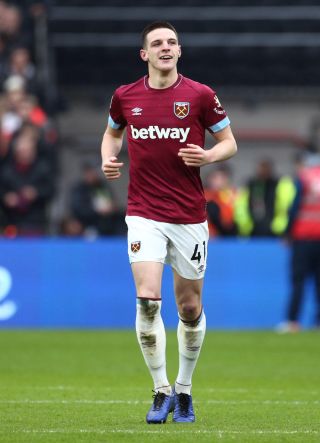 Newly-eligible Declan Rice is in line for his first England call-up as Gareth Southgate continues to look to the future, Press Association Sport understands.

While this summer’s inaugural Nations League Finals loom large, attention first turns to the Euro 2020 qualification as the Three Lions kick-off the year against the Czech Republic and Montenegro.

Southgate names his England squad for the upcoming Group A openers at St George’s Park on Wednesday, when West Ham midfielder Rice is set to be called up after seeing his international switch from the Republic of Ireland ratified by FIFA last week.

Wasn't the result we wanted tonight.. but on a personal level delighted to have picked up man of the match on my debut💚☘️. Very proud moment for me & my family. Big love to my dad who came all the way out to come and watch, love you❤👏 #COYBIGpic.twitter.com/Ic8S9epKBi— Declan Rice (@_DeclanRice) March 23, 2018

The 20-year-old, who was born in London and has Irish grandparents, considers himself “to be of mixed nationality” and played for the Republic’s youth teams before representing them three times at senior level.

But those three appearances all came in friendly internationals, allowing West Ham academy graduate Rice to switch to England.

Resurgent goalkeeper Tom Heaton is also set to be included in the squad for the upcoming double-header, having shone for Burnley after fighting his way back into the side after a shoulder injury that ruled him out of the World Cup.

In-form Southampton midfielder James Ward-Prowse is under serious consideration, two years after winning his one and only cap, while Southgate is weighing up selection issues surrounding several of England’s Under-21 players.

Crystal Palace’s Aaron Wan-Bissaka and Saints goalkeeper Angus Gunn are highly rated by the England manager, but preparations for this summer’s Under-21 European Championship may well take precedence if injuries do not bite the senior side.

Joe Gomez, Danny Welbeck, Phil Jones and Marcus Bettinelli were all part of the England squad in November but are currently out of action, while Eric Dier, Ruben Loftus-Cheek, Fabian Delph and Alex McCarthy have struggled for game time recently.

Southgate was at Bournemouth’s 2-0 win at Huddersfield as Callum Wilson made a goalscoring return from a seven-week injury lay-off, but there remains questions over the fitness of John Stones and Jesse Lingard along with Harry Winks and Kieran Trippier.

The latter’s free-kick had England dreaming in July’s World Cup semi-final against Croatia, but his form has dipped this term and he missed Saturday’s Tottenham’s 2-1 loss at Southampton through a gluteal muscle strain.

Dele Alli provided an assist on his first appearance since January 20 and assistant manager Steve Holland was at St Mary’s to also run the rule over Danny Rose, who faces intense competition at left-back from Luke Shaw and Ben Chilwell.

First-choice goalkeeper Jordan Pickford is under scrutiny after a poor display in Everton’s loss at Newcastle and uncapped Wolves captain Conor Coady has been monitored, while Adam Lallana caught the eye with his man-of-the-match display for Liverpool against Burnley.

Southgate is a long-term admirer of the 30-year-old but whether he has played enough minutes to satisfy is an issue, perhaps too his profile as the manager continues to evolve the side.

The focus on the future led Jamie Vardy and Gary Cahill to effectively call time on their international career after the World Cup, while similar discussions were held with Ashley Young in Russia.

The 33-year-old did not follow the same path, though, and England’s starting left-back last summer has not given up on a recall.

Never been away with England and experienced something quite as incredible as the last month. Thanks to all the staff, my team-mates and the fans for making it so special 🦁🏴󠁧󠁢󠁥󠁮󠁧󠁿 pic.twitter.com/ASNM42fkJS— Ashley Young (@youngy18) July 15, 2018

“If he’s looking at younger, different options, then that’s what he’s doing.

“I’ve just got to give my all for Man United and if he calls upon me, then I’ll be delighted.”