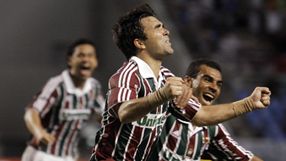 Deco, making his first appearance in the South American equivalent of the Champions League, also set up the equaliser as the Brazilian champions twice came from behind in the Group Three game on Wednesday.

"I feel alive again," the former Barcelona, Porto and Chelsea player told reporters. "Those two months took away my happiness. They were two very difficult months.

"To do what I enjoy again makes me very happy... It was one of the most important goals of my life, because of what I've been through."

Fluminense's win in Rio de Janeiro pulled them right back into contention and kept the group wide open with two games each to play.

Deco, out of action since late January with a thigh injury, came on shortly after the break but saw former Schalke 04 forward Sanchez put the Mexican visitors back in front in the 73rd minute.

Brazil-born Deco, who joined Fluminense last August, then sprang into action, setting up a 79th minute equaliser for Araujo and lobbing the ball over goalkeeper Armando Navarrete to score an 87th minute winner.

Modest Godoy Cruz went top of Group Eight as they drew 1-1 at home to seven-times champions Independiente in an all-Argentine clash.

Matias Defederico fired the visitors in front with a long-range shot after less than a minute. Ruben Ramirez headed Godoy Cruz level shortly after the half-hour.

After four games each, Godoy Cruz have seven points, one more than Uruguayans Penarol and Ecuador's LDU while Independiente trail with four.