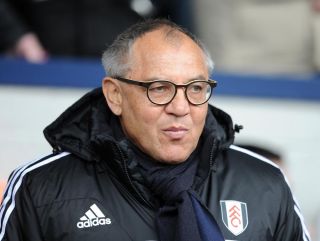 The struggling hosts performed admirably at Craven Cottage but succumbed to late goals from substitutes Kevin Mirallas and Steven Naismith.

That double blow came after Ashkan Dejagah had climbed off the bench to cancel out David Stockdale's own goal and give the Premier League's bottom side hope.

A point would have been a worthy reward for Fulham's display, which was immeasurably better than the one they produced in a 5-0 defeat against Manchester City last weekend.

Magath, who took charge of Fulham on February 14, took solace from the performance, while lamenting the result.

"I think it was our best game until now and we created a lot of chances but unfortunately it was a defeat."

The result leaves Fulham five points adrift of safety with just six games remaining but Magath, whose side travel to Aston Villa next weekend, has not given up hope of masterminding an unlikely revival.

"I know that we can still make it, because today Everton was one of the best teams at the moment. Everton (will go) on to maybe take fourth place in the league," the German added.

"We played better than a relegated team and so if we have done it today we can do it next week again."