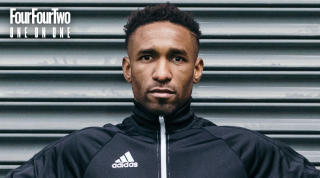 But the England international – who celebrated his first Three Lions appearance since 2013 with a goal against Lithuania last month – has quashed claims that he had grown up liking the Gunners, insisting he only ever had eyes for one man.

Responding to readers’ One-on-One questions in the May 2017 issue of FourFourTwo, Defoe says: “Was I a Gooner as a kid?Absolutely not! My local team was West Ham and I used to go and watch them play when I was younger. The Arsenal connection came from me saying that I loved watching Ian Wright, but I was not an Arsenal fan. I just loved Wrighty.”

Arsene Wenger’s side – as well as Manchester United – had been linked with a move for the speedster before he first signed for Spurs in February 2004.

The 34-year-old explains, though, that while talk of joining his childhood hero’s team was exciting, he was more interested in the challenge at White Hart Lane.

“Louis Saha had gone to Man United already and he was on fire,” Defoe says.

“The Arsenal link was exciting because Ian Wright was my hero as a kid. However, Spurs was perfect for me because of their history of strikers – Gary Lineker, Jimmy Greaves, Jurgen Klinsmann and Teddy Sheringham – so I wanted to get on that list, too.”

Read the full One-on-One interview with Jermain Defoe in the May 2017 issue of FourFourTwo magazine, in which we profile Paul Pogba and his attempt to conquer the toughest job in football, and reveal our latest rundown of the Top 50 Football League Players. Also this month, we discover how rows, rage and relegation helped to make Antonio Conte a winner, travel to Belgium with a group of protesting Charlton Athletic fans, meet the UK’s first female manager of a senior men's football team, and investigate how excess, addiction and divorce is leading the game’s young, rich and famous to financial ruin. Order it now, then subscribe!