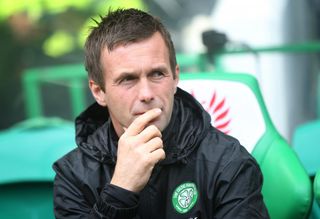 The Norwegian's fledgling reign at Celtic Park took a turn for the worse as the Scottish champions crashed out at the play-off stage after a 2-1 aggregate defeat.

Despite boasting an away goal from their 1-1 draw in the first leg, Marcos Tavares' late goal sent Celtic out as Maribor made it to the group stages of the competition for the first time since 1999.

Deila must now focus on the UEFA Europa League and the former Stromsgodset boss pulled no punches in his assessment of Celtic's performance.

"We did not lose because of the defending, we lost because we did not create anything," he said.

"We hope we can stand in the same position next year with a whole other feeling than I have right now.

"In the end there's only one thing to say - we have not been good enough, and we have not deserved to go to the Champions League.

"Of course it is disappointing. It's a hard feeling. And this feeling I have to take with me, the players, the staff and the whole club and start working. There's no excuses."

Celtic had been handed a reprieve in the competition when, having been beaten over two legs by Legia Warsaw, the Polish side were thrown out for fielding an ineligible player.

Following another damaging defeat, Deila expressed his intention to bolster the squad in a bid to improve fortunes.

"I think we had a good enough team to go through but we didn't do it," he added.

"I know that we're going to get a good team and that we need to get some signings. We have some already but we have been a little unlucky with injuries on not only the new signings but also on Scott [Brown] and James [Forrest].

"By autumn we'll have a bigger and better squad.

"It's very difficult to get the quality of players that the fans and I want to get with the salaries we have, but we are going to have a signing or two more."