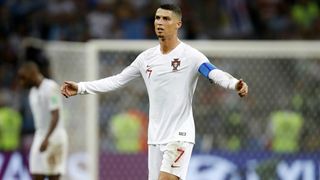 Alessandro Del Piero hailed Juventus' capture of Cristiano Ronaldo and hopes it will boost the club's prospects of winning the Champions League.

Ronaldo, 33, completed a reported €100million move from Real Madrid to Turin on Tuesday, ending a highly successful nine-year career with the LaLiga giants.

The five-time Ballon d'Or winner claimed four Champions League titles during his time in the Spanish capital, and Del Piero hopes his attitude and winning mentality can boost Juve's chances of European success.

"Juventus want to win the Champions League, but not only that, to be recognised on the same level as the greatest clubs in the world," he told Sky Sport Italia.

"Since 2006, we have struggled in Italian football, so raising the bar here with Ronaldo makes a difference in terms of image for Serie A and calcio.

"He is a player who can score from any angle and has great technique, but on top of any economic aspects, I think he brings this incredible desire to win.

"The hunger he has, the way he wants to be the best, is what drags him forward almost as much as his undoubtable quality."

Del Piero also believes Serie A will benefit from Ronaldo's move, saying it gives motivation to the teams looking to challenge Juve's seven-year stranglehold on the league.

"Juve are a club accustomed to focusing on the details, determination and the next success rather than the one they've just had. They always aimed higher and wanted to raise the bar, so he will fit in perfectly.

"I think it'll raise the competition level in Italy, raise the desire to beat this Juve side that has won seven titles in a row and today people are talking about Juventus, Turin and Italy all over the world in the way they haven't for many years."