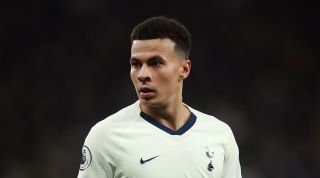 Dele Alli believes Tottenham have been one of the best teams on the planet in recent years.

Jose Mourinho's side progressed to the fifth round of the FA Cup with a 3-2 victory over Southampton on Wednesday.

Spurs were a little fortunate to triumph over their Premier League rivals, who performed well throughout the contest in north London.

But Alli believes his team deserved a bit of luck having fallen short in the pursuit of silverware in the last few seasons.

"It says a lot about the character we have," he told BT Sport. "To go from such a big game at the weekend [a 2-0 defeat of Manchester City], it's easy to lose a game like this.

"We showed great character, at times a bit sloppy, but sometimes it takes one little switch and I think it was their second goal.

"It has been a long time coming, we've been one of the best teams in the world in the years we've been together, we deserve a trophy.

"But no one is going to give it to us, we have to keep pushing – and not just for us, but for the fans – we have to win something."

Mourinho admitted that his side were outplayed on Wednesday but expressed delight at the result.

"We suffered. We played against a very good team, we played against a team that was the best team on the pitch but we deserved to win because we were in our limits. They had their best players, they had one more day rest, they were fresh.

"I think I did very well because I had to manage a team with so many difficulties. I changed from the back five to the back four in the moment when I could. Then Dele Alli became the link.

"The players [played with their] souls, and heart and gave absolutely everything. Four matches over two rounds, really hard for the boys. They deserve this happiness."

Tottenham will take on Norwich in the fifth round, which is set to be held in early March.

How powerful is the fear of losing? What Everton's weekend comeback tells us about Watford