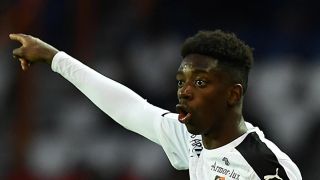 Ousmane Dembele scored on his Borussia Dortmund as the Bundesliga side hammered Erkenschwick 5-2 on Friday.

The Frenchman joined Dortmund from Rennes during the close-season and did not waste any time in making an impact, opening his Dortmund account after just three minutes.

Dembele continued to cause the Erkenschwick defence all kinds of trouble before the break, but did not have a hand in his side's second goal as Dennis Konarski beat his own goalkeeper after some good work from Jacob Bruun Larsen.

The 19-year-old stayed behind in the dressing room at half-time as Thomas Tuchel made 11 changes, with Felix Passlack making it 3-0 within four minutes of the restart after being set up by Gonzalo Castro.

Dortmund continued to dominate proceedings and Christoph Zimmermann was next to add his name to the score sheet with 18 minutes left on the clock.

There was more to come from last season's Bundesliga runners-up in the closing stages of the game as Castro netted a fifth.

Erkenschwick refused to give up, though, and pulled one back shortly after via Konarski, before Lukas Abulhanov had the last say to make it 5-2.