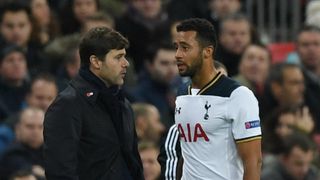 Tottenham midfielder Mousa Dembele has shrugged off being described as "a genius of football" by manager Mauricio Pochettino.

The Argentine compared the 30-year-old to Diego Maradona, Jay-Jay Okocha and Ronaldinho, with Dembele having starred in recent Premier League games against Manchester United, Liverpool and Arsenal, as well as a 2-2 draw away to Juventus in the Champions League.

But despite Dembele hitting the headlines for his fine form in Spurs' 14-game unbeaten run in all competitions, the Belgium international is keen to concentrate on his football.

"Everybody wants to be appreciated and if it's the manager who says this then it's good," Dembele told Sky Sports ahead of Sunday's trip to Crystal Palace.

"But the most important thing for me is not to focus on what is said but to stay focused on what we are going to do. I think as a team we are playing very well which makes it easier for me to do what I have to do.

"I like to have the ball as much as possible. I want to take on players but I like to pass as well. It depends on the game and the way we have to play, how I have to adapt my game.

"Sometimes there's more space so it's better to dribble and take on players but sometimes if it's crowded you need to keep it simple and use a different tactic to break the line.

"It's always hard to break the line when there are so many players in front of you. We have a lot of creative players in our team. It's very difficult to play against our style of team as there is always a simple pass to another creative player."

Although Spurs have made great strides under Pochettino, the club remains without a trophy since winning the EFL Cup in 2008.

But Dembele - who joined from Fulham in 2012 - believes the progress being made by Spurs, who will move into their new stadium for the start of next season, indicates silverware is on the way.

"He has changed the mentality of the club and the way everyone thinks; how to strive for perfection," Dembele said of Pochettino. "The way we train every day you can see we want to achieve something.

"You can see that on the pitch as well. If we are focused and ready mentally we can be good against any team. It will be disappointing if we don't win anything because we have put so much work into this. Obviously, if we can win something the satisfaction will be huge.

"We are a positive-minded group. Personally I don't try to focus that far ahead. If you think about the Champions League then the next game is Juventus at home. I don't like to think too far ahead of that. Everybody is different, some players need to look ahead for motivation.

"It takes energy if I try to think too much about everything and try to sort out everything in my head so I like to keep it to the next game. We'll see where we end up and I hope, before I know it, we have a trophy."