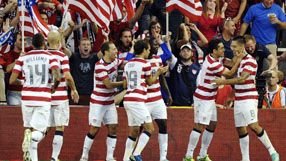 The USA finish top of North, Central America and Caribbean (CONCACAF) Group A on 13 points with Jamaica, who beat Antigua and Barbuda 4-1, also going through to the final six of CONCACAF qualifying. Guatemala missed out on goal difference.

Jurgen Klinsmann's team suffered an early scare when Carlos Ruiz broke away and latched on to a long ball, finishing coolly to put Guatemala 1-0 up in the fifth minute.

But just five minutes later the U.S were back on level terms.

Dempsey headed on a corner at the near post and defender Carlos Bocanegra drove home his 14th career goal for the national team.

The Tottenham forward then put the hosts ahead in the 18th minute when he converted a low cross from the impressive Eddie Johnson.

Dempsey made it 3-1 nine minutes before the break after a smart exchange with Michael Bradley, who was a dominant figure in midfield.

With Guatemala needing goals to get back in the frame for qualifying, the U.S kept things tight in the second half and could have even extended their advantage - Johnson missing a great chance to score when he mis-kicked inside the area.

The win though, and progress to the final six, was never in doubt after the first half and former Germany international Klinsmann was pleased with his team's display.

"The team stepped it up and we created the amount of chances we wanted to, I wished we could have had some goals in the second half too but I thought the performance was really, really good," he told ESPN television.

"The crowd was amazing and really helped the whole team... I think Guatemala never had [even] a little bit of a chance," he said.

The U.S face a friendly away to Russia before next year's final round of CONCACAF qualifying in which the top three out of the six nations will qualify for the 2014 World Cup finals in Brazil.