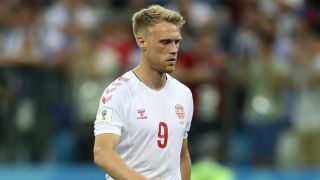 The Danish Football Association have reported death threats made towards Nicolai Jorgensen to the police, after the striker was targeted on social media following the nation's World Cup exit.

Jorgensen was one of three Denmark players to see penalties saved as they lost a penalty shoot-out against Croatia on Sunday.

After the Feyenoord forward had missed his side's fifth kick, Ivan Rakitic converted from the spot to book Croatia's place in the quarter-finals at Russia 2018.

With Jorgensen receiving a barrage of online abuse on his Facebook and Instagram profiles in the aftermath to the game, the Danish FA have taken action to "put an end to this madness".

"STOP. Our society must never accept death threats - not against World Cup stars, politicians or anyone else. That is totally unacceptable and indecent," they said in a statement on Twitter.

"We are reporting the matter to the police to put an end to this madness."

Christian Eriksen and Lasse Schone were the others to miss penalties for Denmark after the last-16 tie had finished 1-1 after extra time at the Nizhny Novgorod Stadium.