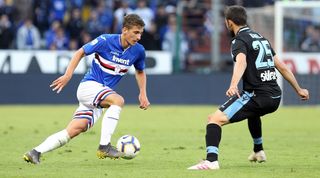 Danish centre-back Andersen enjoyed a breakthrough season in Serie A in 2018/19, while Belgium international Praet impressed in midfield for Marco Giampaolo’s side.

Their form didn’t go unnoticed at the Emirates, with the Gunners making a bid of €48 million for the pair.

However, Gazzetta dello Sport transfer expert Nicolo Schira has reported that Samp have responded by telling the Premier League club that their asking price is set at €55 million.

The Italians value 23-year-old Andersen at €30 million and Praet at €25 million and talks between the clubs are ongoing.

It isn’t the first time the clubs have been involved in negotiations, as Lucas Torreira swapped the Stadio Luigi Ferraris for north London last summer in a €30 million move.

FEATURE 9 bold transfer predictions that will DEFINITELY happen this summer

QUIZ! Can you name all 33 England players to take a shootout penalty in a competitive tournament?