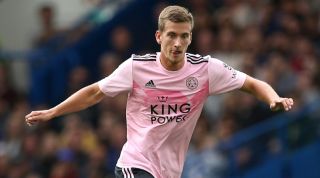 The Belgium international sealed an £18 million move to the King Power Stadium from Sampdoria on deadline day after three years in Serie A.

But Praet has revealed that his career path could have gone very differently when he had several options open to him as a teenager.

At the age of 15, he was given a tour of Arsenal's training facilities by Liam Brady, but eventually decided that his development would be bettered served by moving to Anderlecht.

“I had three or four really good options,” Praet told the Guardian.

“We went to visit Arsenal, Lille, Ajax and Anderlecht. Arsenal would have been a really nice step and I could earn a lot more money there than in Anderlecht, but at that moment my education was not finished and that was really important for me – there was no insurance that I would become a good football player.”

Praet made over 100 appearances for Anderlecht before heading to Italy in 2016, and at the age of 25, he’s now ready to take on the challenge of the Premier League.

However, he revealed that his move to Leicester side wasn’t all smooth sailing as they rushed to get a deal done before the deadline.

“It was a really close call because it was deadline day,” he said.

“I arrived at the training ground but there were some small issues with the contract and I think it was only one hour before the deadline that everything was figured out, so I signed just in time.

“But I arrived here with the thought that if I sign, I could go back to get my stuff I needed. But the gaffer really wanted me to stay for the first game. I had no boots, so I did two training sessions and the first game with somebody else’s. I don’t even know whose they were.”

Praet also revealed that boss Brendan Rodgers thought the midfielder was ignoring him after failing to get a response to his messages.

“He sent me a text message the day before I came but it was on my Belgium number that I didn’t have with me, so I saw it three days after I signed,” Praet said.

“He thought I didn’t reply to him. He said: ‘I sent you messages!’”

ARSEBLOG: What kind of team does Unai Emery want Arsenal to be?