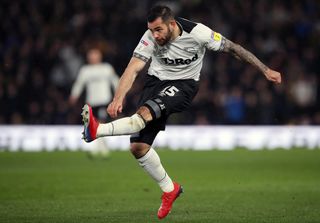 Derby midfielder Bradley Johnson has vowed the Rams are a different animal this season.

The 32-year-old believes Frank Lampard’s side have developed from the team who lost in the play-offs last year.

Under Gary Rowett, Derby lost 2-1 on aggregated in the play-off semi-final to Fulham and were criticised for trying to contain the Cottagers in the second leg, despite being 1-0 up.

They face Aston Villa – who have beaten them 3-0 and 4-0 this term – in the Sky Bet Championship play-off final at Wembley on Monday but Johnson insisted Derby will not shut up shop.

He said: “This year our mentality is different, we want to go out and win every game. The young lads want to win and when they play with confidence they do very well.

“I’m seeing young players who are hungry and confident with no fear. Things have changed, the way we play now is different to last year.

“I’m thriving playing with players who have unbelievable talent. When you have young players in your team who are confident and play with no fear it’s something you can sit back, watch and enjoy.

“We tried to stop Fulham because they were the best team in the league with passing the ball. We had to stay compact and had to get our goal on the counter.

“We tried to do that to Leeds, our first home game it was about stopping them.”

One of Johnson’s young team-mates is Fikayo Tomori, the on-loan Chelsea defender who will be tasked with keeping friend and fellow Stamford Bridge loanee Tammy Abraham quiet.

Abraham has scored 26 goals for Villa this term but rather than play mind games, Tomori has opted for radio silence.

He sad: “We spoke after the Leeds game and he congratulated me. We’d actually spoken and said ‘imagine if we got in the play-off final together’ and it’s happened.

“We said it was the last time we would speak to each other until after the game. I’m focused on Derby, he’s focusing on Aston Villa and that’s how it should be.

“It’s a special moment since we’ve played together since we were seven.”