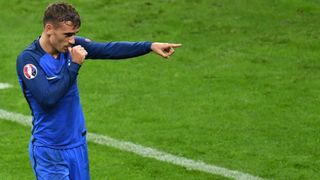 France coach Didier Deschamps lauded Antoine Griezmann and hopes to see more from the attacker after reaching the Euro 2016 semi-finals.

Griezmann struck in the first half of his side's 5-2 quarter-final victory over Iceland on Sunday as they booked a meeting with Germany.

The Atletico Madrid man is the leading goalscorer at the tournament with four, and Deschamps hailed the 25-year-old.

"Long may it continue, if he can be the top scorer so much the better for us," he said.

"He is fit now and did not have any fatigue tonight or during the previous match.

"He is a clinical finisher, he is excellent technically and we hope he continues like this."

Olivier Giroud scored a brace to go with goals from Griezmann, Paul Pogba and Dimitri Payet in Paris.

At the other end, Lyon defender Samuel Umtiti impressed on his international debut, much to Deschamps' delight.

"Clearly he is a good defender. He is relatively calm and he played his part in making sure that we defended well.

"I gave him a bit of problem in the second half because I put him on to the right [of the central defenders] because I did not want to take any more risks with Laurent Koscielny, who was a booking away from a ban.

"I was not concerned because he is a very relaxed individual."

Deschamps, however, was unwilling to say whether Umtiti had done enough to retain his spot for Thursday's semi-final.

He said: "He has the same chances as the other players. He has not lost any brownie points tonight, quite the opposite.