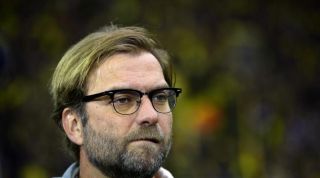 Dortmund will start the second-round tie as overwhelming favourites and coach Jurgen Klopp will be desperate to avoid a slip-up after a poor start to their league campaign.

Saturday's 1-0 setback at home to Hannover was Dortmund's fourth consecutive league defeat and their sixth in nine matches this term.

The loss has left them languishing just one place above the relegation play-off places and was particularly disappointing considering the way they had ruthlessly brushed aside Galatasaray 4-0 in the UEFA Champions League on Wednesday.

Dortmund chief executive said there is no chance that Klopp will be dismissed.

"I rule that [Klopp leaving] out completely," he told the club's official website. "Jurgen will always find the right solution.

"I have always said that our coach determines the end of his time at Dortmund himself. Jurgen is as meticulous and innovative as he was from the first day [in the job]."

With Dortmund already 13 points adrift of leaders Bayern Munich in the league ahead of the champions' clash with Borussia Monchengladbach on Sunday, the Pokal could represent Dortmund's best chance of domestic silverware this term.

Dortmund, who lost in last season's final against Pep Guardiola's men, face Bayern in Der Klassiker on Saturday and a cup victory could provide a much-needed boost ahead of that eagerly-anticipated encounter.

St Pauli will also have to forget their disappointing league form if they are to pull off a shock at the Millerntor-Stadion.

The Hamburg-based outfit find themselves in 14th place in the German second tier, having won just three times in the league this term.

A 4-0 hammering at home to Karlsruher on Saturday was their latest setback, Hiroki Yamada started and ended the comprehensive victory, while Rouwen Hennings and Selcuk Alibaz were also on the scoresheet.

Part of Dortmund's early season troubles have been down to a host of injuries, although the recent returns of the likes of Marco Reus, Ilkay Gundogan and Erik Durm have boosted Klopp's men.

St Pauli too have had issues with injuries, Markus Thorandt, former Dortmund player Marcel Halstenberg and David Buballa are all expected to miss out, but Christopher Buchtmann and Jan-Philipp Kalla could come into contention after recently returning to training.