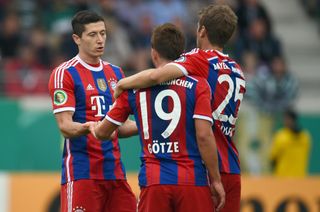 The first round of Germany's primary cup competition continued on Sunday and Bayern's involvement headlined the day's action.

Pep Guardiola's men finished with an easy 4-1 win at third-tier Preussen Munster as they bounced back from their DFL Supercup defeat against Borussia Dortmund impressively.

Mario Gotze marked his first start since scoring the winner for Germany in the World Cup final by giving Bayern - who are looking for their third Pokal win in a row - an early lead.

And another one of Germany's World Cup heroes, Thomas Muller, added a second before half-time.

David Alaba got on the scoresheet early in the second half with a well-struck effort from outside the area before Claudio Pizarro scored with a delightful chip.

Rogier Krohne got a late consolation from the penalty spot for Preussen, who then had Marc Heitmeier sent off for bringing down Robert Lewandowski in the area - only for the Pole to spurn the chance to score his first competitive goal for Bayern from 12 yards.

Magdeburg produced the surprise of the day as they edged Augsburg on home soil.

Christian Beck, who bagged 23 goals for Magdeburg in Regionalliga last term, was the hero for the hosts, scoring the 57th-minute winner.

Werder Bremen only just avoided a similar shock, needing extra time to see off fourth-tier Illertissen 3-2, as did Wolfsburg, who needed a penalty shoot-out to see off Darmstadt after a 0-0 draw at Stadion am Bollenfalltor.

Hoffenheim did things far easier as they hammered Paloma of the fifth division 9-0.

Of Hoffenheim's goals, seven came in the first half, with Sven Schipplock helping himself to four.

Schipplock capped off a five-star performance with another in the 53rd minute while Tarik Elyounoussi, Ermin Bicakcic, Adam Szalai and Anthony Modeste also got on the scoresheet.

Other Bundesliga sides in action were Freiburg, who won 2-0 at Eintracht Trier, while Paderborn were beaten 2-1 by Red Bull Leipzig.

Also progressing to the second round were Aalen, Erzgebirge Aue and Wurzburger Kickers.