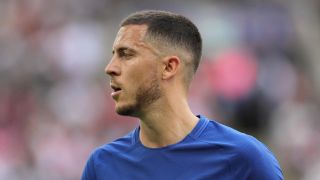 Chelsea manager Maurizio Sarri will have to adapt his methods to make sure he gets the best out of Eden Hazard, according to Paolo Di Canio.

Hazard was outstanding for Belgium at the World Cup in Russia, with his performances prompting a spike in speculation linking him with a move away from Stamford Bridge.

However, he remains a member of Sarri's squad for now as Chelsea prepare for their opening league game of the new season, away at Huddersfield on August 11.

Di Canio, who played in the Premier League with Sheffield Wednesday, West Ham and Charlton Athletic, has concerns over whether the free-spirited Hazard can flourish under the Italian coach's rigid style.

"I'm wondering if he [Sarri] will be able to bring his idea of football," Di Canio told reporters.

World Cup knockout football is not easy, but we have a great atmosphere and this team never gives up. Thank you for your support everyone, we needed it yesterday. Quarter finals we’re coming, we are  July 3, 2018

"He needs to improve in the management of the world-class players who don't want to be closed in a specific role.

"For example, a player like Hazard wants to play free on the pitch but we know that Sarri wants players to respect a specific role on the pitch. Sarri will need to work on it."

Sarri led Napoli to second place in Serie A in 2017-18, finishing four points behind champions Juventus having led the way for most of the season.

He has been praised for his side's elegant passing football and Di Canio feels the Chelsea job is a deserved reward for the 59-year-old's achievements in his coaching career.

"I'm happy [for Sarri] because he deserved it [to be the manager of Chelsea]," said Di Canio. "He paid his dues.

"He arrived in Napoli where he got lot of points and he was so close to interrupting the domain of Juventus. Now, he finds himself into another reality.

"I don't want to compare Napoli with Chelsea, but Chelsea are a world-class club in terms of organisation. And the Premier League is the best football league in the world."