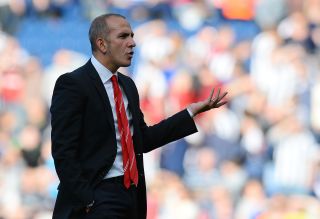 The Italian parted company with Sunderland in October after just 13 games in charge, leaving the club bottom of the Premier League following a 3-0 loss at West Brom.

Sunderland's fortunes have since improved under Gus Poyet, who has guided them to the final of the League Cup, although the Wearside club are still in the relegation zone with just 18 points from 22 matches.

But, despite Sunderland's revival, Di Canio has little affection for some of his former players, singling out Lee Cattermole and Phil Bardsley for criticism.

"These two players (Cattermole and Bardsley) were rotten - the most unprofessional players I've ever worked with," he told the Sun on Sunday.

"What Bardsley has done in the last year speaks volumes. Photos of him lying on the floor in a casino covered by £50 notes and laughing at the team losing on the opening day, that's public.

"It's no surprise these players were kicked out of my plans. The reason Sunderland stayed up at the end of last season was because Cattermole was injured and Bardsley played very little."

"I don't like people who, when they speak to you, don't look into your eyes," Di Canio added.

"He (O'Shea) should say sorry to some of his team-mates for the many times he came into my office to say something unfavourable about them.

"This is the same person that also came to me when I first took over and said things about (Martin) O'Neill."

Di Canio's spell at the Stadium of Light garnered just three victories, but the former Swindon Town boss claimed that he had the support of most of the squad.

"On my phone, I have 14 text messages from players at the club supporting me," Di Canio continued.

"Speak to the majority of players who have worked with me and they'll say, 'It was tough working for Paolo, but he was professional'."