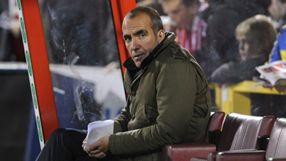 The outspoken former Milan, Lazio and West Ham United player, appointed as Swindon manager in 2011, is desperate to hold on to loan signings John Bostock of Tottenham Hotspur and Norwich City's Chris Martin after their deals expire.

"I'm sure with them we have more of a chance to win."

Di Canio's time in management has been anything but dull.

His passion has often boiled over into rows with his players and this season he antognised fans by telling those unhappy with his decisions to go and support local rivals Oxford United.

Di Canio ruled out selling his houses to finance Swindon but said he was prepared to eat into his savings to fulfill his ambition of taking the club into the Championship.

"I'm not going to start selling my houses in Italy, but I want to keep those players," Di Canio, told BBC Radio Wiltshire.

"When I die I will have a bit less money but will have the victory as a manager. I've spent big money on solicitors in the past; you can imagine what I would spend on my players."