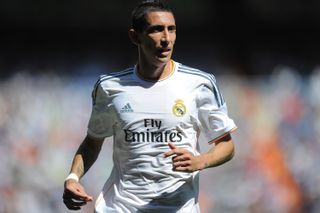 The Argentine winger was strongly linked with a move away from the Santiago Bernabeu during the close-season as Bale's world-record arrival from Tottenham drew nearer.

However, he decided to remain with the Spanish capital club and has been involved in all four of their La Liga fixtures this term.

Di Maria also shone in their UEFA Champions League demolition of Galatasaray on Tuesday - creating two of their six goals in Istanbul.

And the former Benfica man has insisted he never had eny intention of following Mesut Ozil and Kaka out of the club.

"I decided to stay at Real Madrid despite the players that the club was going to sign," the 25-year-old told Argentine radio station Rock and Closs.

"I knew I was in a good time, and I had conditions to stay at Real Madrid.

"Gareth Bale came into the team to play in my position. I try to give my best to stay in the team.

"Coach Carlo Ancelotti said he will play me which is better."