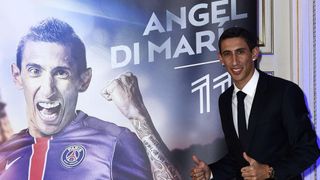 Paris Saint-Germain new boy Angel di Maria is eager to learn from the likes of Zlatan Ibrahimovic and Edinson Cavani following his move from Manchester United.

The Argentina international arrived in the French capital last week following a disappointing season at Old Trafford and could make his debut against Montpellier in Ligue 1 next Friday.

Sunday's visit of Gazalec Ajaccio is likely to come too soon for the 27-year-old winger - who played in the Copa America before failing link up with United on their pre-season tour of the United States.

Di Maria is determined to hit the ground running at his new club with the help of his team-mates.

"With the quality of players like Zlatan Ibrahimovic, Marco Verratti, Thiago Silva, Edinson Cavani... and so many others, I think I'll learn a lot. I will continue to grow." he told the club's official website.

"I'm still young. A player learns until the end of his career, season after season. I will try to enjoy being around these players so I can continue learning.

"During my career I have always tried to adapt to the play of great players around me. I am the last in, so I'll try to take my mark as quickly as possible, to get along with everyone.

"The most important thing for me is to understand how my team-mates play."

Following spells with Benfica, Real Madrid and United, Di Maria is also confident he can adapt to the French top flight.

"Ligue 1 is a championship at a very good level, with very good players," he added.

"I will try to adapt as quickly as possible even though I know it will not be easy. I will in any case, give everything in every game."