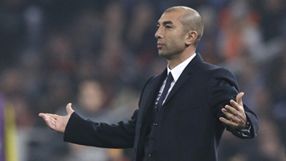 "We are very strong at home and it will be a different game back in London," Di Matteo told reporters after the holders went down 2-1 at the Donbass Arena.

Chelsea host Shakhtar at Stamford Bridge in their next Champions League fixture on November 7 and the former Italy midfielder knows his side must improve if they are to qualify for the knockout stages.

"We have to win our remaining two home games, that's for sure," he said, also referring to the match against Danish underdogs Nordsjaelland on December 5.

Chelsea were outplayed for all but the last 15 minutes by a Shakhtar side boosted by a third-minute goal from Alex Teixeira.

Fernandinho made it 2-0 in the 52nd minute before Brazilian Oscar scored a late consolation goal for the visitors.

"It is very difficult when you concede an early goal," said Di Matteo. "It's a shame we got back into the game a bit late.

"I believed we could score at least but they punished us after we lost the ball in midfield for the second goal. We have to do better as a team in those situations."

Shakhtar played with style and panache throughout and showed the dynamic form that has taken them to the top of the Ukrainian championship with 12 wins from as many matches.

"Our supporters saw the real Shakhtar tonight," said defender Darijo Srna. "We looked much better than Chelsea in this game and it is a pity we did not manage to score more goals.

"Our players have grown in confidence this season so this victory was not accidental. It's a great win for us."

Shakhtar are top of Group E with seven points from three matches, three ahead of Chelsea and four in front of Juventus who drew 1-1 at bottom club Nordsjaelland on Tuesday.