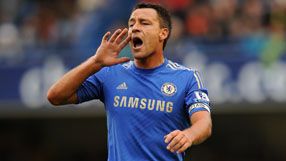 Terry was banned for four matches and fined 220,000 pounds this month after an independent Football Association (FA) commission found him guilty of abusing Ferdinand last year.

He had until Thursday to appeal but instead issued an apology for the insult saying he was accepting the ban, which applies to domestic games only.

Chelsea said on Thursday that they had taken disciplinary action against the defender but Di Matteo would not elaborate on Friday at a tense news conference at the club's training ground at Cobham, south of London.

"We do not discuss publicly the disciplinary matters we take against our players. They remain confidential. You will have to wait and see," Di Matteo told reporters when asked if Terry would remain as captain.

"They are internal matters, the action we take against our players, and we are not going to discuss it."

Although he is banned from domestic matches, Terry can play in the Champions League. Asked if he would captain the side against Shakhtar Donetsk in Ukraine next week, Di Matteo said: "You will have to wait until Tuesday."

Although Terry did not apologise directly to Ferdinand in his statement on Thursday, Di Matteo said the club backed his apology.

"I think he has apologised generally to everyone including the Ferdinand family," said Di Matteo.

"I don't think it was a matter of not apologising directly but it's an apology for the language he used in the game. He realises it was inappropriate to do so and he has been banned and fined by the FA for that."

This weekend marks the first anniversary of the QPR-Chelsea match when the incident occurred and is also the designated anti-racism weekend promoted by the Kick It Out campaign with players due to wear their slogan on their warm-up tops before matches.

However, several black players including Reading's Jason Roberts have said they will not wear the shirts in protest at what they regard as the FA's leniency.

A number of players are upset with the FA for not taking a stronger stance against the racism issues thrown up by the Terry case which were also the subject of a magistrates' court case in July when he was found not guilty of a racially motivated public order charge.

Manchester United manager Sir Alex Ferguson said at his news briefing on Friday: "I think everyone should be united, I don't know what point [Jason Roberts] is trying to make.

"He really should be supporting all the other players who are doing it."

He will be free to return for the home match with Liverpool on November 11.