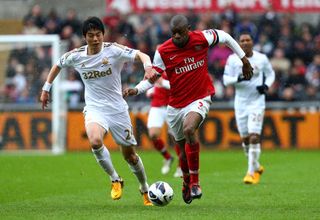 The France international has been blighted by injuries at the Emirates Stadium, with his latest spell on the sidelines coming after he tore his anterior cruciate ligament against Swansea City in March 2013.

Manager Arsene Wenger confirmed on Tuesday that the 27-year-old has returned to training and is fit to play a part in the remaining three Premier League matches of the campaign, although he remains cautious about rushing Diaby back.

"He is back in full training now and available to play," Wenger told Arsenal's official website.

"He might play a part of the game for the under-21s.

"Yes of course (he could play for the first team this season), it depends how well he comes out of the game.

"He hasn't played for a year but physically he is ready to play, completely. It is now just decision-making, getting used to challenges again. He needs a game.

"Everybody (counted him out) but he is fit and ready."