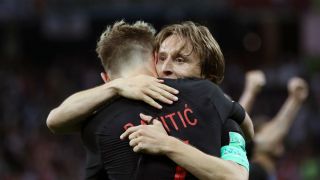 Former Croatia international Joey Didulica hopes the nation can make a good start to Sunday's World Cup final against France, but he expects a "cagey" encounter.

Zlatko Dalic's men have come from behind in each of their three games in the knockout stage so far, including their 2-1 semi-final win over England.

While Croatia have gone to extra time in their past three games – and to penalties in two of those – France beat Argentina, Uruguay and Belgium in 90 minutes.

Didulica, who played four games for Croatia and was part of the 2006 World Cup squad, expects a tense decider.

"The road has been unbelievably hard and they've got through it so there's nothing that this team can't do," he told Omnisport.

"I just hope it's in 90 minutes this time. It's driving me crazy. Last minutes of extra time, last minutes of full-time and another penalty shoot-out, I couldn't handle it."

Didulica added: "I think it's going to be cagey and I hope it is a little bit cagey. I see a 1-0 sort of a win, whoever scores first can win it. I'd like to hope that we score the first goal.

"You never know. It's anyone's guess."

Croatia came into the tournament as dark horses, but won all three of their Group D matches before battling through the knockout stage.

"I think the resilience of the group is something I've never seen before in the Croatian team and I think very few teams have it, I think this really separates the Croatian national team from many others in the past," he said.

"We've gone down in a lot of the games and we've come back and won, and in extreme circumstances as well.

"I think the defining game for me will still be the Argentina game. I think to beat Argentina in a World Cup 3-0 in the way that we did, in the fashion that we played, was remarkable.

"Seeing a Croatian team, 90th minute, pressing like that, was extraordinary and I think that was the turning point for me and I think for a lot of the boys there within the camp.

"I think they would've just got that belief like they've never had before."