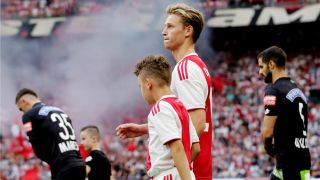 Frenkie de Jong insists he is no clearer on reported interest from Barcelona as rumours of a switch from Ajax continue to swirl.

The 21-year-old laid on seven assists in 22 Eredivisie appearances last season and his impressive performances have led to rumours that LaLiga champions Barca are considering a move for the Netherlands Under-21 international, although Ajax have continued to deny a deal with be struck.

It is thought that a transfer could be dependent upon whether Ajax qualify for the group stages of the Champions League, with De Jong playing the full 90 minutes of Wednesday's 2-0 win over Sturm Graz in the first leg of their second round of qualifying tie.

And De Jong remains none the wiser over the possibility of a move.

"The talks about a possible transfer are still going on. I see all the newsflashes, everybody tells me stuff," he told Voetbal International.

"At first I thought it was kind of funny, but after a while I was thinking 'does this ever stop?' But besides all that, my summer was quite normal."

Barcelona have already flexed their financial muscle in the transfer market this window, signing Bordeaux's young Brazilian star Malcom for €41million this week.