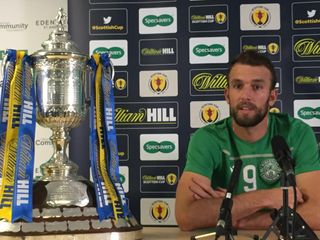 The 27-year-old Welsh striker joined the Hibees from Forest Green last summer and is now well-versed on the day never to be forgotten by those at Easter Road.

Ahead of Sunday’s fifth-round tie against Lowland League side BSC Glasgow at Alloa’s Indodrill Stadium, Doidge said: “David Gray doesn’t stop talking about it to be honest.

“No, (seriously), it was obviously a great day and the way the boys won it at the end. I’ve seen clips on YouTube of the boys’ celebrations and I can imagine how good that felt.

“It is something that you strive for and you would love to have that feeling.

“I’ve seen the goals numerous times. When I was planning on coming up here, it was something you looked at and it was definitely something I looked at.”

BSC will play in the fifth round of the Scottish Cup for the first time but Doidge knows how they will be approaching the match.

He said: “I have been in their shoes and I know what it means to play against a big side.

“It was when I was with Dagenham and we played Everton at Goodison Park.

“You turn up to the game and you wonder who you will be playing against and marking. It was a great occasion even though we lost.

“You have a lot of nervous energy and are probably running around like a headless chicken at the start.

“We’re going to have to match them and hopefully our football can be better than theirs and we can come out victorious.”

The uncapped Doidge – who has scored 15 goals this season – hopes the cup can help fire him into the Wales set-up where boss Ryan Giggs is preparing for this summer’s European Championship with friendlies against Austria and the United States next month.

He said: “Yes, that is one of the big reasons for coming up here.

“You get the coverage and to do it at this level, hopefully I am knocking on the door and it would be an extremely proud moment for me.

“I haven’t heard anything (from Wales). They obviously have their games in March but hopefully I have done enough.”

Hibs manager Jack Ross stressed how much respect he is giving to Sunday’s opponents.

He said: “We have a realistic opportunity to get to the quarter-final which for us is a massive incentive.

“Probably the best way to describe it is that this is just as big a game for us as it is for BSC.

“They will obviously, for very different reasons, point to what a big game it is for them as a club but for us, the motivation to get to the last-eight of the Scottish Cup is huge so hence the reason why the preparation for the game is just as consistent as it was for the game on Wednesday evening (against Rangers).”