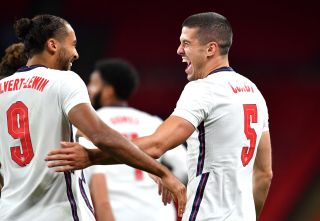 England striker Dominic Calvert-Lewin described his debut goal as the “stuff of dreams” after opening the scoring in a 3-0 win over Wales.

Calvert-Lewin, selected to start by manger Gareth Southgate due to his fine form for Everton, headed in Jack Grealish’s cross in the 26th minute at an empty Wembley.

“It is a shame there are no fans here to celebrate, and my family could have been here, so bittersweet in that sense, but to score on my debut is the stuff of dreams,” Calvert-Lewin told ITV Sport.

“I have worked very hard to get here, it has felt like a long road but I am very pleased to be here and get the opportunity and score on my debut.

“I enjoyed the time that I did play on the pitch and be ready to step in if I am needed.”

Coady also had an evening to remember, stabbing home Kieran Trippier’s free-kick eight minutes into the second period and ending the game as captain.

“I am still in a bit of shock. It will live with me forever, it will be on repeat in my house with my kids. It is an amazing night for me,” said Coady.

“It is an incredible night, to score is absolutely amazing.

“I can’t explain it, to play with these players is incredible, everything about playing here at Wembley for England is amazing. It is a night I will never forget.

“You want to come and impress but I want to help the team if I am called upon.”

England boss Southgate was pleased with the efforts of his new-look team and felt they improved as the game progressed.

“I thought the players did very well. It’s so difficult for almost a completely new team to come together with not a lot of experience around it. I thought they coped with that very well,” he said.

“It wasn’t fluid at the start but the longer the game wore on, they got more and more into the game, they solved the tactical problem that Wales posed us when they were pressing and I thought we finished very strong.”

Asked about the impact of debutant Calvert-Lewin, Southgate replied: “Excellent, really very good. He had excellent presence, his runs were a threat, he presses well, and he obviously took his goal well, so he can be really pleased.

“He’s in a really good vein of form. He’s an all-round centre-forward and I’ve always liked his general play, it’s the goals he’s adding now that are making another level of player.”

“We were missing some of our best players, quite clearly. The players that weren’t in the team tonight would get in most teams in Europe,” said Davies.

“We came with a young squad, we showed a lot of character early on to get on the ball, to press hard, to really give it a go and it shows a bit of character in the team that we didn’t come here and just sit off and come into the game with a negative attitude, to kill the game and look for a draw, catch them on the counter.

“I was proud of the boys the way we had a go tonight.”

Defender Davies also acknowledged that Ryan Giggs’ side have significant room for improvement.

“The (first) goal was a real a sucker-punch. They were clinical. As soon as they got in good areas, they created better chances than we did,” he said.

“There are positives to take from this game but we know we have to do some things a lot better.

“It was disappointing the way we conceded the goals.”