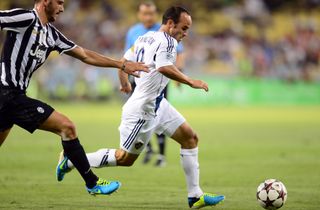 The United States international, 31, was contemplating his football future seriously earlier this year, but decided to sign a lucrative, incentive-based deal to keep him in California.

Save for a few short loan spells, Donovan has been at the Galaxy since 2005, making over 200 appearances and winning five MLS Cups - most recently going back-to-back last season.

And the number 10 said it was a heartfelt decision to remain with the club that he has called home.

"This for me runs a lot deeper than a contract," Donovan said.

"This to me is personal and it's emotional.

"Not many athletes any more have the opportunity to play in one place for a long time in their career.

"Not many athletes have the opportunity to play at home.

"Not many athletes have the opportunity to play with an organisation like this.

"When I look along the wall and see all these people here that are in the front office every day supporting us, it makes me proud to be a part of this."

Galaxy boss Bruce Arena hailed Donovan as the MLS' best player, after the veteran of 151 international caps and 56 goals for his country stayed at the StubHub Center.

"And we're thrilled to be able to move forward now with the Galaxy and have Landon as a big part."