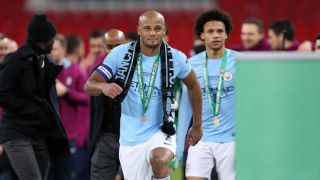 Vincent Kompany insisted Manchester City should not be put on a "pedestal" following their EFL Cup success as he challenged the club to win more trophies.

Captain Kompany put his injury woes behind him with a goal to lead high-flying City to a 3-0 victory over Arsenal in Sunday's EFL Cup final at Wembley.

Sergio Aguero and David Silva were also on target as Premier League champions-elect City claimed their first title of the season.

The Premier League and Champions League are still on offer for Pep Guardiola's side, who have earned plaudits from far and wide amid their stunning season.

But Belgian defender Kompany said this City team still have a lot to achieve if they want to be considered one of the greatest at the Etihad Stadium.

"We'll have to see when the trophies are coming. If we win more and consistently, if we can the Premier League then go again and again, then this team will be better than the previous one," he told reporters.

"We have scored hundreds of goals as well with [previous manager Manuel] Pellegrini. It's been a feature of this club for many years now.

"I kind of want to keep that hunger in the team, so I don't want to put people on a pedestal when we haven't achieved all of our targets yet. So, for now, well done, keep going."

City, who are poised to reach the quarter-finals of the Champions League, host Chelsea in the Premier League on Sunday.