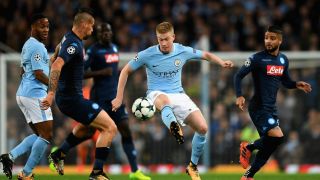 Kevin De Bruyne is happy to focus on extending his fabulous form on the field, with preliminary talks over a new contract at Manchester City having already taken place.

The Belgium international impressed once more as Pep Guardiola's side made it three wins out of three in Champions League Group F on Tuesday, holding out for a pulsating 2-1 triumph over Napoli.

Ahead of the match, De Bruyne's agent Patrick De Koster was quoted by The Sun as saying he would seek to use the astronomical wages paid by Paris Saint-Germain to Neymar and Kylian Mbappe as benchmarks when discussing fresh terms with the Premier League leaders.

Neymar is reported to earn €600,000 per week at the Parc des Princes, while City are understood to have De Bruyne on a current weekly wage in the region of £115,000.

The 26-year-old is under contract at the Etihad Stadium until 2021 and, speaking after he set up Gabriel Jesus' decisive goal against Napoli, he confirmed De Koster has met with City's director of football Txiki Begiristain to the wheels in motion on an extension.

"My agent went already one time to Txiki," he said. "Talks are coming.

"I'm patient anyway, I don't stress it. I think I read something in the press [about his contract] but I have time."

Great night at the Etihad! We hold on to 3 very important points and remain on top of the table!  October 17, 2017

De Bruyne is similarly at ease when it comes to assessing the hype around a succession of acclaimed showings for City, which culminated in Guardiola fielding questions comparing his midfielder's talents to Lionel Messi before the Napoli match.

"I come home and just do what I always do, no matter if it's a good game or a bad game. I just like to enjoy my football, that's a big part of me.

33 - have the best goal difference of any team in the top five European leagues in all competitions this season (+33). Juggernaut. October 17, 2017

The precision low cross for Jesus in the 13th minute marked De Bruyne's seventh assist in all competitions this season.

His impeccable deliveries during last weekend's demolition of Stoke City were the talking point of a 7-2 win where the ex-Wolfsburg man did not actually get on the scoresheet himself.

Being cast as his team's chief provider is a role De Bruyne has long relished.

"Obviously, the team knows better and better the way I play [but] I think if you check my assists, what I did before in Germany and Belgium, a lot of times it's the same," he said.

"The way I think is it's great to get a player in a scoring position. If I can give that ball I will give it because I think at that time in the game it’s the right pass for me."

De Bruyne clattered the crossbar with a fine strike against the Serie A pacesetters, part of an eventful outing that also featured him exchanging cross words with colleagues David Silva and Fernandinho.

A late first-half booking was the source of the playmakers' ire, with his senior team-mates bearing the brunt as he sought to remonstrate with the fourth official at half-time.

But De Bruyne was happy to report the trio's midfield marriage was quickly back on track.

"We had a little discussion at the time, it happens," he added. "There's nothing wrong. After one minute, it's over.

"At home I get some arguments with my wife. I think it's normal."