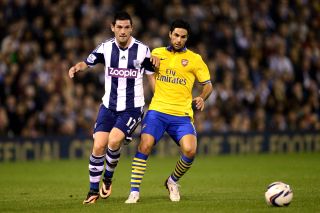 The midfielder has not featured for West Brom since a League Cup 1-1 draw with Arsenal in September, and has seen opportunities limited thanks to the arrivals of Morgan Amalfitano and Stephane Sessegnon, as well as the form of youngster Saido Berahino.

But Clarke praised Dorrans' attitude as he looks to bounce back from being omitted from the matchday squad for two consecutive fixtures.

"Graham knows the situation," he told the Birmingham Mail. "He knows where he is and he works well in training every day.

"He actually asked to play in the last Under-21 game (against Liverpool). He came to me and said 'gaffer, I need a game'.

"That tells you he is in a positive frame of mind and wants to keep himself in good shape.

"At the moment there are no big issues."

Clarke has ruled out the possibility of Dorrans leaving the club on loan and insists no decisions will be made with regards to players' futures until the January transfer window.

"I don't even think about the transfer window at this stage," added Clarke.

"When I get to December I will start to think about the January transfer window and have conversations about players.

"I'm not sure how many games we've got between now and the transfer window opening, but those players who are on the sidelines now will possibly be back in the team by then and we will be talking about a different set of players."