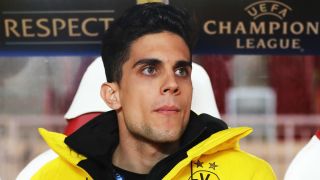 Borussia Dortmund defender Marc Bartra will return to the matchday squad on Saturday if he receives a final clearance from doctors, head coach Thomas Tuchel has confirmed.

The centre-back has not played since being injured in the bomb attack on the Dortmund team bus prior to the first leg of their Champions League quarter-final with Monaco last month.

Bartra had surgery on a broken wrist sustained from the blast but returned to first-team training this week ahead of Dortmund's trip to face Augsburg at WWK Arena.

Tuchel is waiting to hear if the 26-year-old can play with a plaster cast but hopes to have him back in the squad at the very least.

"Marc Bartra can play against Augsburg. That's the absolute positive news," he told a news conference on Friday.

"I still have to talk with the doctor to see if he can play with a cast.

"If he is cleared to play, he'll be in the squad."

Dortmund sit third in the Bundesliga with two games remaining, six points behind second-place RB Leipzig and two ahead of Hoffenheim in fourth.

I've been looking forward to this moment for weeks! So happy to be here today. Can't wait to compete again next to my team mates!! C'mon!!  May 10, 2017