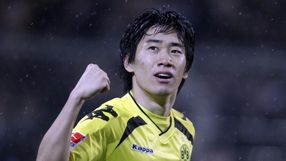 The Japanese midfielder and Paraguayan forward have now scored 13 goals between them in the team's superb start to the season.

Dortmund, who have won 10 of their 12 games and have not lost since the opening day of the season, have 31 points and an impressive haul of 29 goals.

Hamburg counterpart Armin Veh said: "They're a very good team, for me they're the favourites".

There was barely a shot on goal in a disappointing first half and the game came to life four minutes after the break when Lukasz Piszczek burst down the right and pulled the ball back for Kagawa to hit his sixth league goal of the season with a deflected shot.

Nuri Sahin's 30-metre free-kick was then tipped over by Jaroslav Drobny as the home team stayed on top.

Kagawa helped create the second in the 70th minute when he set Mario Goetze free on the right.

Goetze found Kevin Grosskreutz at the far post and he teed the ball up for Barrios to score his seventh league goal of the season.