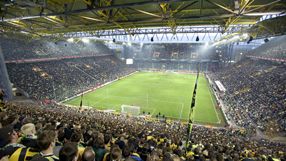 The Federal Crime Office (BKA) said it found and defused three suspected explosive devices near the stadium used by the Bundesliga club. Police also found three explosive devices in the flat of the suspect, who was German.

A spokesman for Berlin's Interior Ministry said: "There is no indication of any links to terror or Islamic organisations."

He added: "The suspect was apparently acting on his own with a criminal motivation. There was no danger to any third parties at any time."

The BKA said it began its investigation in February after an anonymous email tip was sent to the German embassy in Islamabad. The sender offered to provide information about two simultaneous attacks planned in Germany.

Police said the person who sent the anonymous tip became a suspect related to a possible extortion attempt. He was detained in a hotel in Cologne on Tuesday and told authorities about the six explosive devices near the stadium and in his flat.

Authorities said the man detained was also a suspect in an unresolved extortion attempt against a German company in 2010.