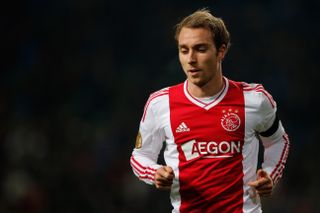 The Denmark international joined Spurs from Dutch champions Ajax on August 30 in a deal reported to be worth £11million.

Eriksen had been linked with a number of clubs before making the switch to White Hart Lane, with Liverpool and Dortmund among those believed to have approached the 21-year-old.

The attacking midfielder confirmed that the UEFA Champions League finalists did contact him with a view to a transfer to Signal Iduna Park, however, they did not follow up that initial enquiry.

"Dortmund was interested and they approached me," Eriksen told Danish newspaper BT.

"I guess that they contacted all the candidates they had - and I was one of the many.

"They were there and there was a phone call from them. But it's a long time ago and a lot has happened since."

Eriksen, who has been capped 38 times by Denmark, has yet to make an appearance for Tottenham, but could feature in their next outing against Norwich City on September 14.