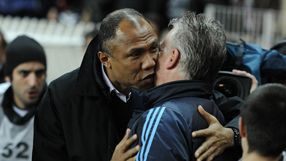 Champions Olympique Marseille take on bitter rivals Paris Saint-Germain at the Stade Velodrome on Sunday with much more at stake than just bragging rights between two of France's biggest clubs.

Fourth-placed Marseille are four points off leaders Lille with 11 games left in the season while PSG, in fifth, are a further three points behind and in danger of slipping out of the title picture if they lose on the south coast.

PSG have lost and drawn their last two league games having looked like being real challengers but there is nothing like a meeting with Didier Deschamps's side to stir up passion in the capital club.

With such a juicy domestic match awaiting, Marseille have no time to dwell on Tuesday's Champions League last-16 exit, after they lost to Manchester United.

"Sunday will be a special match but Marseille are used to high-pressure games and it's up to us to play this classic match in the best possible way to win," midfielder Lucho Gonzalez told reporters.

Their disappointment at losing 4-1 on aggregate to Real, a team they had never previously lost to, was slightly soothed by the return from injury of centre-back Cris and playmaker Yoann Gourcuff.

Coach Claude Puel hinted recently that he could walk away at the end of the season and now that their European campaign is over, the game with Rennes could help to define their season and possibly the manager's future.

Rennes, a point above Lyon and three points behind Lille after losing at home to Marseille last time out, cannot afford to play safe and another one of their usually open games is expected.

Lille, who travel to Stade Brest on Saturday, will hope their four title rivals can all cancel each other out.