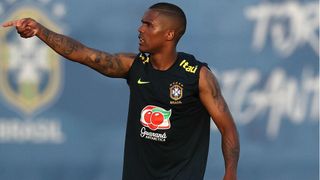 Brazil received a boost as Douglas Costa returned to training ahead of the World Cup quarter-final against Belgium.

The Juventus winger has managed just 45 minutes in the tournament so far, coming on at half-time in the 2-0 victory over Costa Rica.

However, Costa picked up a hamstring injury during his impressive cameo performance, ruling him out of his side's final Group E fixture, against Serbia.

He was also not involved in the last-16 tie with Mexico but was back working with his team-mates on Tuesday as Tite's squad prepare for Friday's fixture in Kazan.

Costa - who completed a permanent move to Juventus in June after spending last season on loan in Turin from Bayern Munich - could be set to make a return to action when Brazil bid to reach the last four of the tournament.