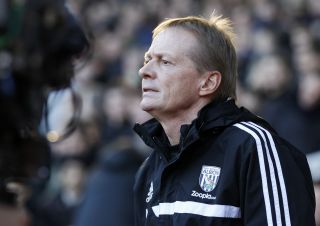 The Midlands outfit begin their quest for a first triumph in the tournament since 1968 with a home tie against Crystal Palace in round three on Saturday.

West Brom's recent record in the tournament leaves a lot to be desired, with the club falling at this stage in two of their last three attempts.

But Downing is focused on progression in a tournament he holds in the highest regard, and pointed to Wigan's unlikely victory in the final last season as his inspiration.

"We haven't progressed in recent times in cup competitions and so we want to try to change that record and go as long as we can in the competition," Downing said.

"There's still a buzz about it, there's still a feeling about the competition for Saturday and we'll go out there and try to get through to the next round.

"It's something we can win. Wigan have done it before, Birmingham City have done it in the League Cup. It goes to show you can win it, you've got to have the luck of the draw and the rounds as you go on."

West Brom have already beaten Palace at The Hawthorns this season, courtesy of a 2-0 victory in November, but Downing is expecting a sterner test from Tony Pulis' men.

He added: ""I have total respect for Tony Pulis, whatever side he puts out will be organised and hard to beat.

"They certainly are a different Palace side to the one who came here at the start of November.

"They've picked up some reasonably good results, went to Manchester City and showed some real resilience and could have won it or got a better result."