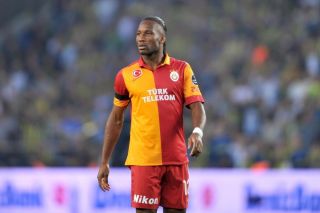 The teams have been drawn together in Group B of Europe's premier cup competition and will kick off their 2013-14 campaign with a meeting at the Turk Telekom Arena in Istanbul.

The pair also met in last year's tournament at the quarter-final stage, with Galatasaray winning the second leg 3-2 but suffering a 5-3 aggregate defeat which halted their progress.

And Drogba believes the Turkish club can earn a repeat result with the vociferous backing of their supporters.

"With our game we can get the fans to cheer," he told the club's official website.

"Last season, Madrid’s players were in shock. After the game they said it was crazy, we have great fans.

"And it's true, our fans are the best. I hope that on Tuesday they are behind us, as always, and that we can give them a nice surprise.

"It will be difficult to win, but I hope that we can get a good result. Madrid are a great club with great players, but football is played on the field, 11 against 11, so why not?"

The Ivorian, who won the 2011-12 edition of the Champions League with Chelsea, also refused to write off Galatasaray's chances of emerging from a group that also contains Copenhagen and Juventus.

"If you look at the teams in the group then it is normal to think we will finish third or fourth, but in football anything can happen," he added.

"I believe in this team and I think that we can qualify for the next phase."