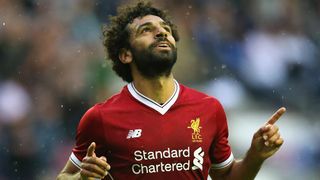 Didier Drogba lauded former team-mate Mohamed Salah after the Liverpool and Egypt star guided his country to the World Cup for the first time in 28 years.

African giants Egypt had not featured at the World Cup since 1990 but Salah ended that drought thanks to his dramatic 95th-minute penalty in Sunday's 2-1 victory over Congo.

Salah's opener on the hour-mark had been cancelled out by Congo's Arnold Bouka Moutou with three minutes of regulation remaining before Egypt's hero sparked pandemonium throughout the stands and across the country in stoppage time.

Briefly a team-mate of Salah's at Chelsea, before the Egyptian left Chelsea for loan spells at Fiorentina and Roma, former Ivory Coast captain Drogba wrote via Twitter:  "Proud of my brother @22mosalah u became a real leader of a Nation reminds me of Cote d'Ivoire in 2006 #thebeautifulgame #russia2018."

Russia 2018 will be Egypt's third World Cup appearance, though the seven-time African champions have never won a match at the showpiece event following qualification in 1934 and 1990.