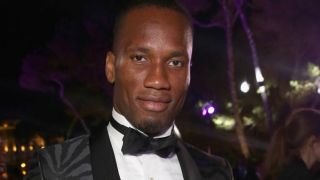 Former Chelsea striker Didier Drogba has been mobbed by fans at his arrival in Montreal after signing for local MLS club the Impact.

Drogba posted a video on Twitter of a packed arrivals hall at Montreal-Trudeau International Airport on Wednesday, with fans held back by security guards, and the 37-year-old forward in the foreground, nodding at the camera with a satisfied look on his face.

The Impact tweeted a picture of Drogba holding one of their club scarves with the accompanying line: "You were waiting for this: Didier Drogba!"

Drogba signed with Montreal on Monday as part of a trade deal with Chicago Fire, committing to the Canadian club until the end of the 2016 MLS season.