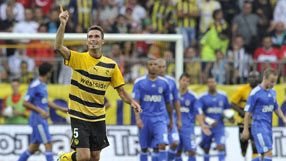 Team doctor Cuno Wetzel told Swiss television that the Argentine, whose condition was stable, had suffered a severe concussion and broken nose after colliding with team mate Francois Affolter during the 2-2 draw against FC Basel.

"It's difficult to say how long the recovery will take, usually this type of injury needs several weeks," said Wetzel.

"The Argentine is on the road to recovery," added the club's website.

The incident interrupted the first half of the Swiss Super League match for eight minutes and the media on Monday were critical of the decision to resume play.

Basel coach Thorsten Fink added: "The result is secondary. The important thing is that Dudar gets better."

Young Boys were leading 2-0 but the Swiss champions, who visit Cluj in a Champions League tie on Wednesday, hit back, barely celebrating their goals.

Dudar's journeyman career has been typical of many lesser-known South American players and far from the glamour enjoyed by the big names.

After four years with Velez Sarsfield in his homeland, he has since played league football in Venezuela, Paraguay and Brazil. He joined Young Boys in 2009, having moved to Switzerland the year before to join FC Chiasso.