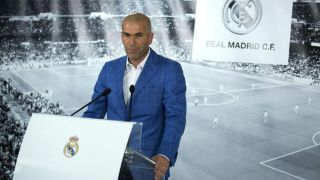 Zinedine Zidane has what it takes to become a success as Real Madrid coach, according to fellow World Cup-winner Christophe Dugarry.

Zidane took over from Rafael Benitez at the Santiago Bernabeu on Monday after the Spaniard paid the price for a rocky eight months in charge.

France great Zidane has coached Madrid's Castilla side this season and was previously part of Carlo Ancelotti's backroom staff.

The former Madrid and Juventus star was welcomed by president Florentino Perez during a news conference on Monday and now faces the biggest challenge of his post-playing career.

As Zidane seeks to unite the Madrid dressing room and reinvigorate the team's La Liga season - starting with a home game against Deportivo La Coruna on Saturday - former France international Dugarry backed his old team-mate to make the most of the opportunity.

The 1998 World Cup-winner told Canal+: "It is his dream. He won because he worked to be the best player in the world.

"He has also worked to become a coach and become the best in the world too.

"This is someone who has tremendous character. He speaks less than others but actually says a lot more.

"He loves wins, feeds on it and I am delighted that at last he can lead a high-level team. The hardest part definitely begins now for him."