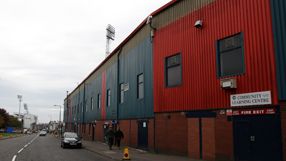 The draconian punishment was handed down by the Scottish Football League and will leave the former European Cup semi-finalists cast adrift at the bottom of Scotland's second tier with minus 11 points.

In a statement the SFL said it regretted the situation the club found itself in but added it had acted to protect the "integrity" of the league.

"We are of the opinion that lessons are not being learned," the statement said. "For example, clubs have to realise that, going forward, they cannot treat their (tax) obligations as something akin to a credit card."

Dundee, who last month laid off manager Gordon Chisholm and nine players, have debts of around 3.21 million pounds, according to administrator Bryan Jackson.

The club were also given a transfer embargo on Monday and told that it's future would be reconsidered on March 31 if it was still in administration.

Jackson described the punishment as "outrageous" on the Dundee website and said he would appeal the decision.

Dundee won the Scottish title in 1962 and reached the semi-finals of the European Cup a year later.