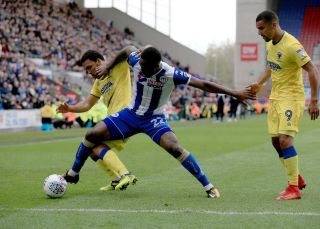 A brace from centre-back Chey Dunkley gave Wigan a thoroughly-deserved 2-0 Sky Bet Championship victory over Charlton at the DW Stadium.

The Latics were on top from start to finish and could and perhaps should have won by an even greater margin.

Charlie Mulgrew also hit the outside of the post for Paul Cook’s side, who are now three matches unbeaten.

The Addicks only really threatened the Wigan goal in stoppage time, with David Marshall pulling off two fabulous saves to deny the visitors even a consolation.

Wigan were on song right from the start, with Jamal Lowe playing a nice one-two with Kieffer Moore before sending his shot straight at the goalkeeper.

And the opening goal duly arrived after 22 minutes, with Dunkley being the big price ‘first goalscorer’ for the second game in a row.

Centre-back partner Mulgrew sent over an inviting corner from the Wigan right and Dunkley showed quick feet to volley home at the far post past Dillon Phillips.

The Charlton goalkeeper was tested again when Wigan skipper Sam Morsy sent a rasping drive straight down his throat.

Morsy was booked shortly after for breaking up a Charlton counter, as the Wigan backline continued to enjoy a quiet afternoon.

Wigan were screaming for a penalty on half-time when Antonee Robinson charged into the box before tumbling to the turf, but referee Andy Davies was unimpressed.

After being second best for all of the first half, Charlton were almost level within seven minutes of the restart.

A cross from the right was hacked over the Wigan bar in the nick of time by Dunkley, with Tomer Hemed waiting for a tap-in.

Within seconds, Lockyer was called into action in his own box to get in a superb block to prevent Lowe’s shot troubling his goalkeeper.

From the resulting corner from Michael Jacobs, Mulgrew flicked the ball against the far post.

The respite was only temporary, however, with Wigan finding their second goal from their next attack.

Again it came from a wonderful corner from Jacobs, and Dunkley rose like a salmon to plant his header into the roof of the net with 20 minutes remaining.

Wigan closed out the win without too much alarm, although they were indebted to their goalkeeper right at the death for preserving the clean sheet.