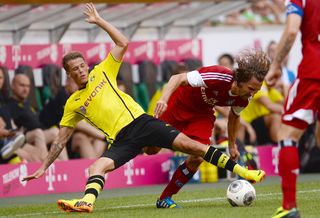 The 21-year-old has broken through into Jurgen Klopp's back line this season, featuring at both left-back and right-back with regulars Piszczek and Marcel Schmelzer injured.

With Dortmund midfielder Nuri Sahin recently dubbing him "Piszczek Junior", Durm feels there are a number of similarities between himself and the Pole, including both players' transformations from attackers to defenders.

"If you look at the past two years just how Piszu, as we call him, has played: it is extraordinary. He came from Hertha Berlin and was retrained by the coach. With him it has worked quite well and I hope that I can walk a similar path."

Durm, who arrived at the club from Mainz in 2012, has made three starts under Klopp in the Bundesliga this season while also featuring in the 3-0 UEFA Champions League win over Marseille.

He believes team spirit and the influence of Klopp has helped him to adapt to life with the Dortmund first team.

"This is something very special and incredibly important to me," he said.

"I can still remember our first meeting, as Dortmund wanted to get me from Mainz.

"He was already sitting at the table and he has an incredible presence. You just like to listen to him and I enjoy learning from him.

"But it is not only Kloppo. It is the entire coaching staff that knows each other since Mainz and work very harmoniously together."