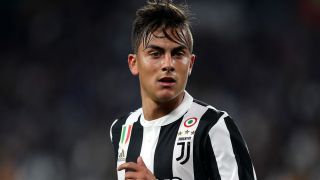 Juventus star Paulo Dybala is not a transfer target for Paris Saint-Germain, according to club chairman Nasser Al-Khelaifi.

The Argentina international has been linked with a possible move to the Ligue 1 leaders and admitted in November he would love the chance to play alongside Neymar.

With Dybala's form having dipped in recent weeks, there have been suggestions Juve could look to cash in on the forward, with Barcelona, Real Madrid and Manchester United rumoured to be interested.

Al-Khelaifi, however, has denied the 24-year-old is seen as an important target for PSG.

"The truth is there are a lot of good players in Serie A, not just Dybala," he told La Stampa. "If we are interested in him, we'll call Juventus.

"[Juve president Andrea] Agnelli is a good friend but I can tell you that Dybala, at the moment, is not the key to PSG's future."

Chelsea boss Antonio Conte and former PSG coach Carlo Ancelotti are among those to be linked with the club, but Emery's job appears safe for now.

"You have excellent players, excellent clubs and excellent coaches in Italy. But, for now, we're happy with Emery," said Al-Khelaifi.