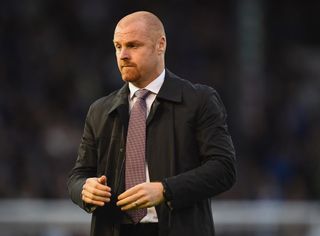 The Premier League new boys are believed to have one of the more modest budgets in the top flight and were beaten by title favourites Chelsea 3-1 on Monday.

Despite the financial differences between the clubs, Burnley showed signs of promise at Turf Moor - taking the lead through Scott Arfield early on.

While the quality of Jose Mourinho's side shone through eventually, Dyche insists his team will compete, adding his intention to bolster Burnley's squad.

"There's no real superstar names, we've brought in the same kind of players we've had," Dyche said on Thursday.

"It's not disrespectful but you look at Chelsea, signing players for £30 million, and that's not our world.

"We've not got names that light up the average fan out there but football people know who they are and what they're about and they're an important part of the unit."

Dyche has been linked with the likes of James McArthur and Henri Lansbury in recent weeks - having previously signed players such as Matt Taylor, Steven Reid and Marvin Sordell over the close-season.

On the subject of further recruitment, Dyche stated his intention to bring in team-orientated players.

"It won't be about individuals for us, it will [be] about the group and how we go about our business as a collective," the former Watford boss added.

"We're looking to really build that group still, there's time yet. There is finance available but it's not endless.

"We still have to use it wisely and cut our cloth accordingly."